Welcome to the 2020 Census Questionnaire

Updated! Self-Response Deadline is September 30, 2020. There's still time. Complete the Survey!
Where is Mecklenburg County in its response rates?  Click here for an interactive map. (Image below updated 06/17/2020). 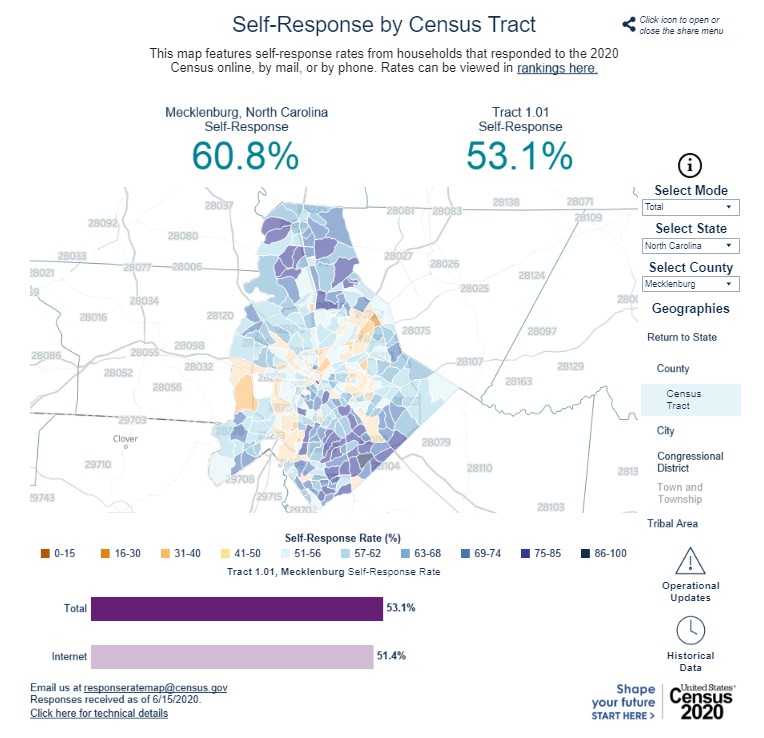 Be Counted. What you need to know about Census 2020. The Census: What is it?
The U.S. Constitution empowers the Congress to carry out the census (Article I, Section 2). The Founders of our fledgling nation had a bold and ambitious plan to empower the people over their new government. The plan was to count every person living in the newly created United States of America, and to use that count to determine representation in the Congress.
https://www.census.gov/programs-surveys/decennial-census/2020-census/about/what-is.html

Why does the United States Government depend on an accurate Census? Why is that important to You and Your Community?

Federal funds, grants and support to states, counties and communities are based on population totals and breakdowns by sex, age, race and other factors. Your community benefits the most when the census counts everyone. When you respond to the census, you help your community gets its fair share of the more than $675 billion per year in federal funds spent on schools, hospitals, roads, public works and other vital programs.

Businesses use census data to decide where to build factories, offices and stores, and this creates jobs. Developers use the census to build new homes and revitalize old neighborhoods. Local governments use the census for public safety and emergency preparedness. Residents use the census to support community initiatives involving legislation, quality-of-life and consumer advocacy.
https://www.census.gov/programs-surveys/decennial-census/2020-census/about/why.html

What questions are going to be asked on the Census 2020 questionnaire?

What does the Census Bureau do to help people who speak languages other than English?

https://2020census.gov/en/languages.html
Guides in 59 Languages that are easy to print out
If you need more help in a language other than English, click here and see page 2 for phone numbers
What if I have questions and want to talk with a Census Bureau employee?
Many questions can be answered by looking at www.2020Census.gov.
If you need more help, call toll-free 1-844-330-2020.
For telephone display service (TDD) for the hearing impaired, call toll-free 1-844-467-2020.

What is the state of North Carolina doing to plan for Census 2020?

What about kids? Kids count too!

Here's a song about being counted in North Carolina. Sing along

What efforts are being made in Mecklenburg County to make sure every one of us is counted?

The Census 2020 questionnaire can be completed online. What if I don't have a computer or Internet?

The Charlotte Mecklenburg Library has 20 locations. Each branch has free Wi-Fi if an individual wants to use their own device to access the Census 2020 questionnaire. During branch closures, the Wi-Fi signal is extended at each branch to reach the perimeter of the facility.