A history of Native Americans in North Carolina Did you know that November is Native American History Month? Keep reading for a brief history on Native Americans in North Carolina and learn how the tribes made their way to the “Tar Heel” state.

Paleoindian Period
The oldest Native American cultural period in North Carolina is the Paleoindian Period. The Paleoindian Period occurred around 10,000 BCE during the Ice Age. Native Americans were nomadic, so they had limited possessions and their access to temporary shelter made travel easy. Since they lived during the Ice Age and many large mammals were close to extinction, Native Americans who lived at the time relied on smaller woodland mammals for food. In order to hunt and gather, spears were created as hunting tools and baskets were made to store food. The oldest spear found is called Clovis, which dates between 9500-8500 BC. It was slender with a long flute to attach the spear. Around 8000 BCE another spear, the Hardaway-Dalton, was created. It did not have a flute, but there were shallow indentations on each side of the spear by the base. 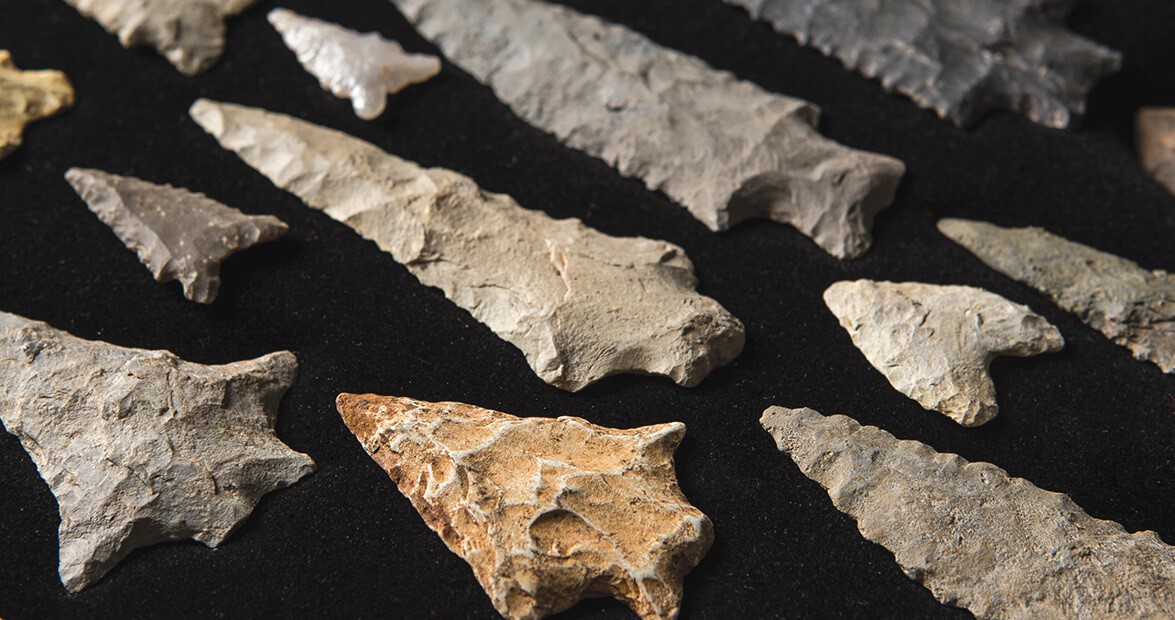 Archaic Period
Native Americans who lived during the Archaic Period used similar tools as the people in the Paleoindian Period did, but changes in diet and hunting were made. The archaic period lasted from 8000 BC-1000 BC, when groups of 25-100 native peoples came to North Carolina. These groups moved during each season and lived near the floodplains. Native peoples living during this time hunted deer, aquatic animals and other small game. The invention of the atlatl, or spear, allowed them to launch it forcibly and far to hunt. Plants were used for medicinal purposes. Stone tools were made to use as jewelry, decorative pins, grooved axes, balancing weights called balance stones for atlatls, fishhooks and awls. Later, they started weaving baskets. 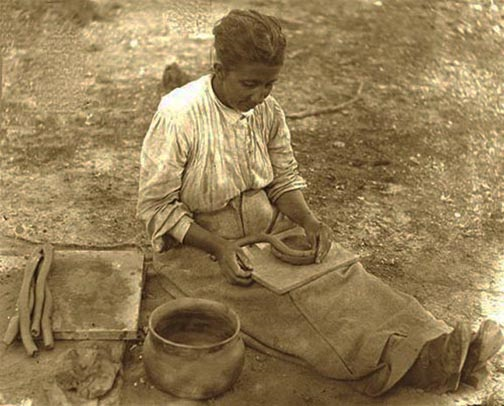 Woodland Period
The Woodland period brought changes in shelter, weaponry,and interaction with other tribes from different states. Archeologists debate how long this period lasted. Many believe that the Woodland Period started in 1000 BC and ended when the Europeans came around AD 600. This period brought the manufacture of clay pots, semi-permanent villages, gardens and settlements occupied by people for several months a year. Styles of pots are adopted from contact with other places such as Ohio and Tennessee. Populations began to increase and wild animals were still hunted as the main sources of food. Pottery styles started to spread through North Carolina with designs that allowed the pottery to also be used for cooking. As for weaponry, the bow and arrow replaced the atlatl, which enabled hunters to hunt more effectively and efficiently. When burying loved ones, members commonly began to include personal artifacts with the body. 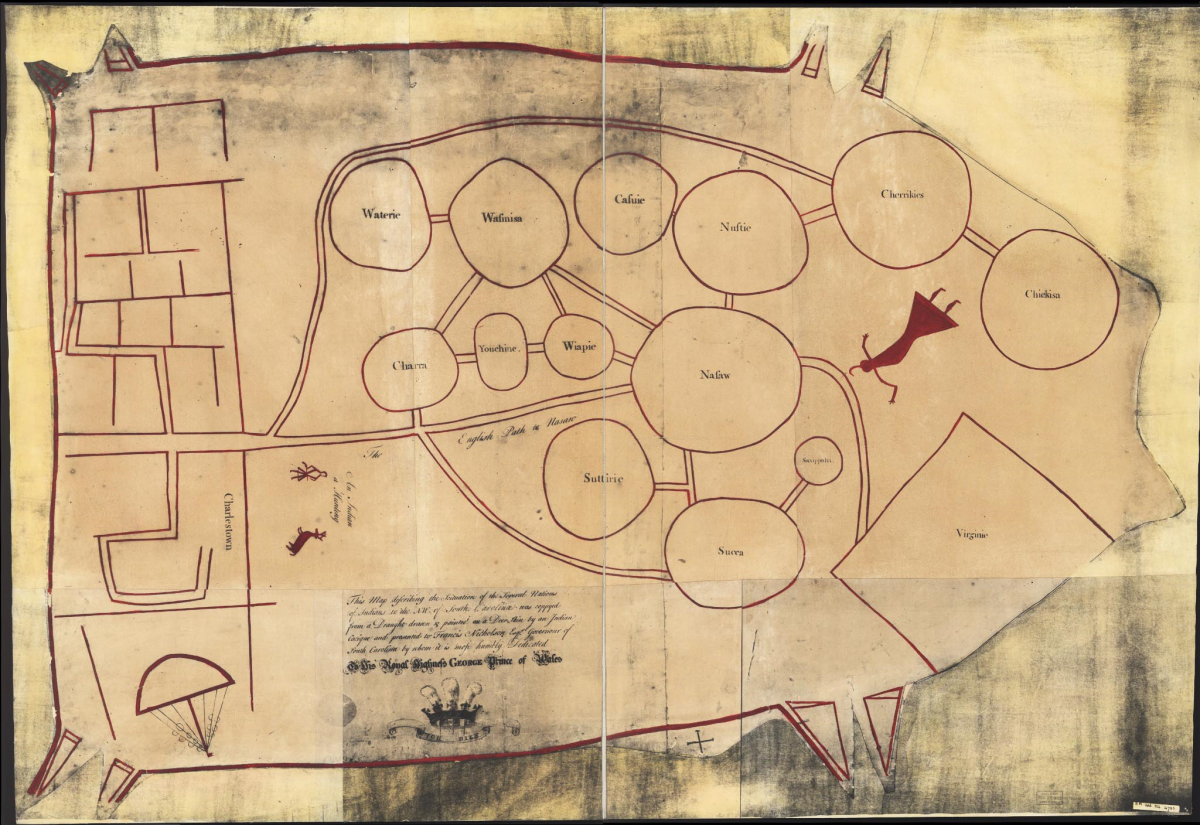 Mississippian or Late Woodland
Religious and ceremonial practices, a new diet, and hierarchies were brought into the Mississippian or Late Woodland Period. This period took place largely in the Piedmont and mountain areas of the Carolinas. It takes place in 8000-1000 BCE. Native Americans in this time ate more corn, squash, and beans as opposed to meat. More modern and permanent homes were built in squares and rectangles. In the Piedmont region houses were oval. Many platform mounds (earthen mounds on top of burned remains of ceremonial lodges) were used for religious and political purposes. Complex pottery styles with intricate designs were used to hold and cook food, as well as for urns. Organization of the social hierarchy also took place during this period. 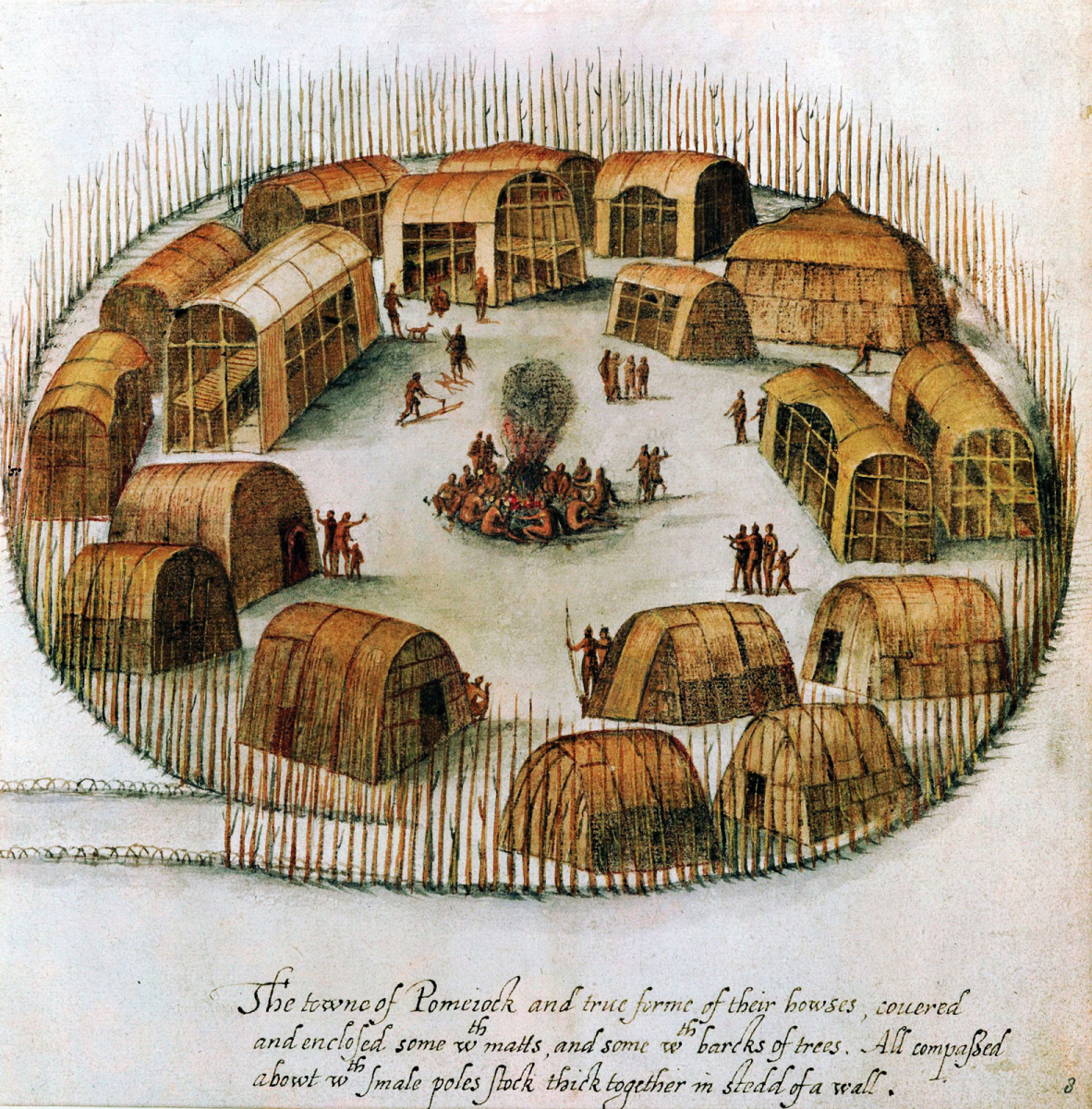 The village of Pomeioc, North Carolina, 1585
Courtesy of the National Archives Records Administration, 535753

Battles
Due to conflicts, changes in weather and diseases; populations began to decline, and battles broke out between North and South Carolina tribes. The Catawba tribe, one of the most well-known tribes in North and South Carolina, fought with European settlers against the French, Spanish and British loyalists. Enemy tribes who fought with the French were the Iroquois, Cherokee, Shawnee and Algonquin. These battles led to expansion issues, decline of populations and slavery. The Tuscarora and Yamasee Wars resulted in the most devastating circumstance for many tribes. With colonial settlements close to the tribes, many Catawbas became captured by British and sold as slaves. The smallpox epidemic, weather, destruction of towns and the influx of refugees caused a population decrease. 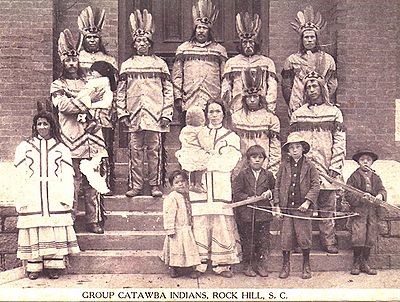 Reservations
The Catawba Nation has a rocky history in the Carolinas. In 1759, the Catawba negotiated with the South Carolina government for a reservation in Rock Hill, SC. In 1760, 20 absorbed parts of tribes were in the area. In 1775, the Catawba fought against Cherokee and Lord Charles Cornwallis. Five years later in 1780, the English captured Charlestowne and the Catawba fled to North Carolina. By 1881, the Catawba returned to see their village destroyed. With a fear of their population soon to be extinct, the Catawba signed a treaty at Nation Ford to sell land to South Carolina, but this violated state laws. They went to North Carolina with a promise of land, but then the state refused to give them the promised land. The Catawbas then returned to South Carolina. In 1850 a 630-acre tract was selected on the west bank of the Catawba river in their old reservation. Catawba finally became a federally recognized tribe in 1973. In 2000, Over 2,200 Native Americans still live in Rock Hill. 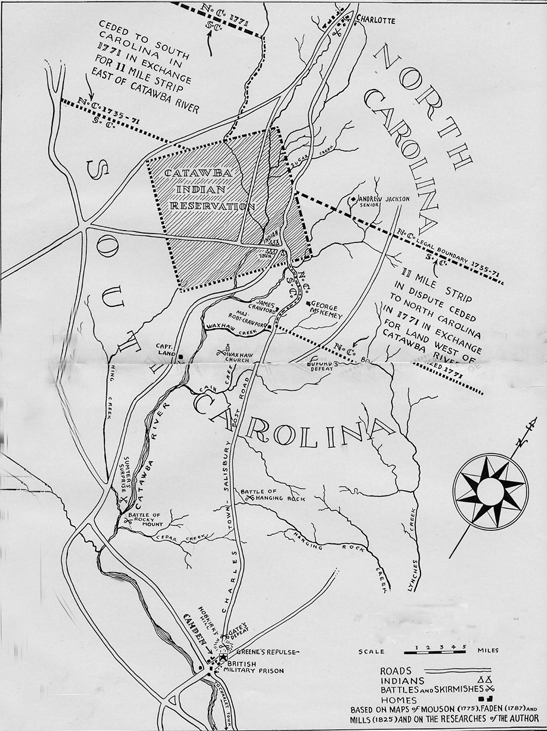 Federally Recognized Tribes
In order to become recognized as a tribe in North and South Carolina, there are rules and responsibilities required by the government. Federally recognized tribes are an American Indian or Alaska Native tribe entity that is recognized as a government-to-government relationship with the United States, with the with the responsibilities, powers, limitations, and obligations attached to that designation, and is eligible for funding and services from the Bureau of Indian Affairs. Treaties, acts passed by Congress, and presidential orders allow tribes to reach this status. 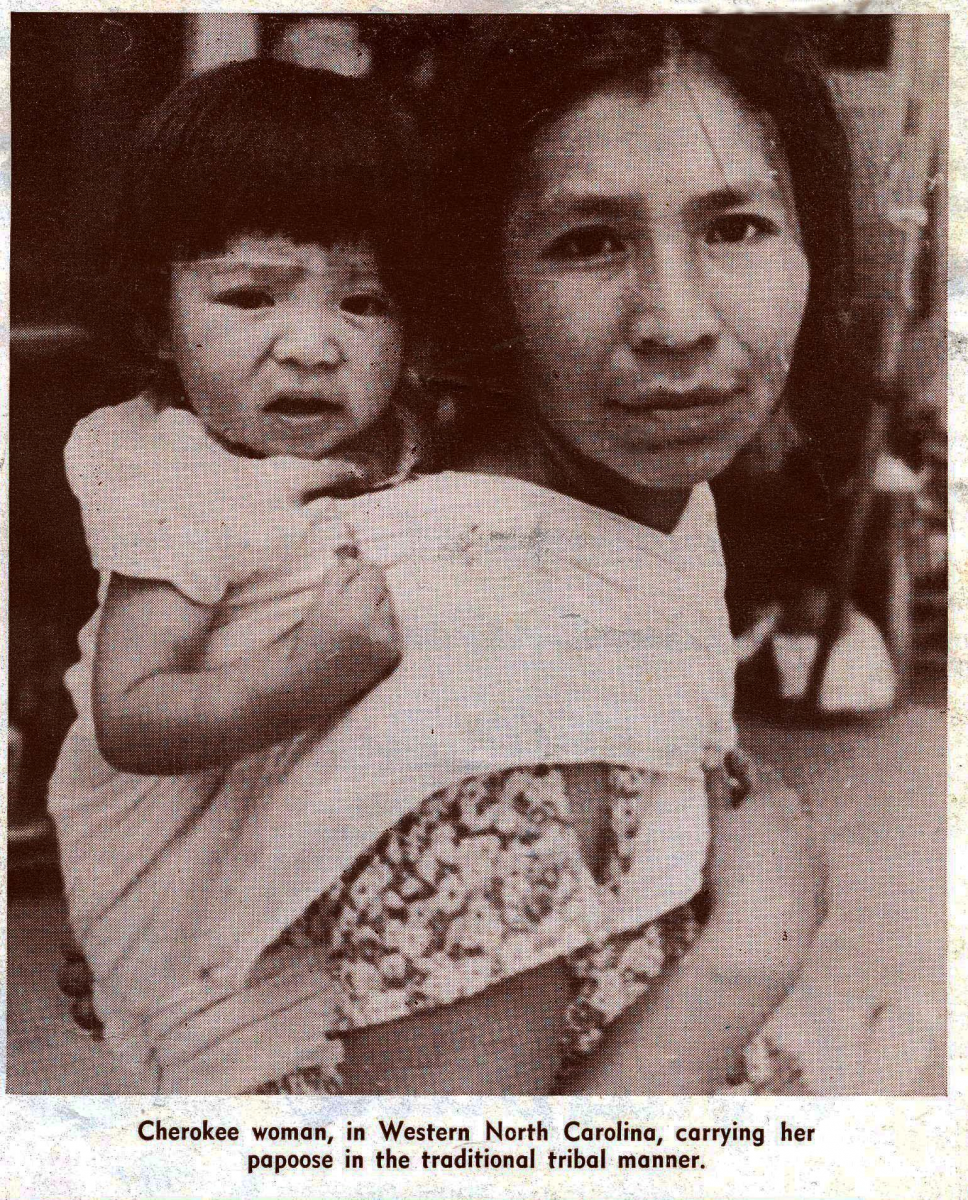 Native Americans have made countless sacrifices in their history. It is vital to recognize and respect their culture and celebrate its lasting beauty.

This blog was written by Julia Zwetolitz, marketing and communications intern with Charlotte Mecklenburg Library.

All photos are courtesy of the Robinson-Spangler Carolina Room unless otherwise specified.