Bring stories to life through movies and music at the Satellite Studios! Have you ever wanted to learn how to use technology to create digital media?  This spring, you can get hands-on with creative experiences in our Satellite Studios! These mini-makerspace experiences give people of all ages the opportunity to explore new technologies, create video and audio content, and more.

Express yourself through animated and live action videos, music, or a combination of the three. The Satellite Studios have the tools you need for each step in the production process, including shooting, editing, and sound mixing. Bring a flash drive to save your completed project or share it online. Studio visitors will gain visual literacy and storytelling skills by working with such hardware and software as GarageBand, iMovie, Stop Motion Pro, fully-loaded iPads and MacBooks, and DSLR cameras.

Some projects that can be created include: 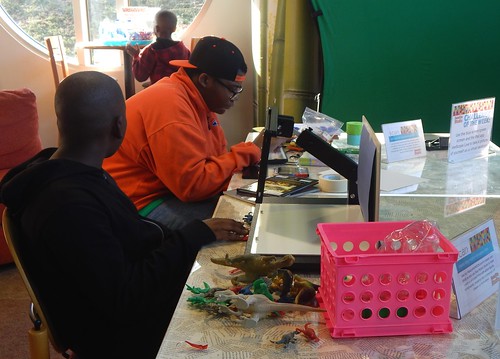 Studios will be available on a first-come, first-served basis during the following hours:

Want to view a sample of what's being created? Watch a SuperBowl 50 video project created by Ruby and Adele, two of the teen interns in the Satellite Studios.

The Satellite Studios are supported by grant funds from the Institute of Museum and Library Services under the provisions of the federal Library Services and Technology Act as administered by the State Library of North Carolina, a division of the Department of Cultural Resources.